After knitting the Clayoquot Toque hat, I wanted to do more and more colorwork.  I fell hard for the fun simplicity of colorwork. Adding colors to your knitting is easy – much easier than some complicated stitch work – and it looks amazing.  So amazing that my husband couldn’t believe that I was able to accomplish such a feat – and it’s not hard!

Colorwork is something I’m going to come back to again and again, I can already tell.

For my second colorwork adventure, I wanted another hat.  And since I had lots of Madelinetosh left over, I needed one that used DK weight yarn. 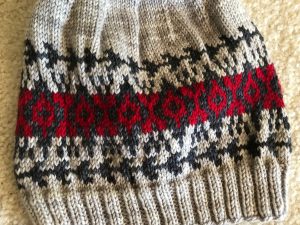 The Dyea pattern, from Caitlin Hunter,  fit the bill on yarn weight and general style.  I didn’t 100% love the pattern but I really liked it.  In fact, I was tempted to modify the pattern a bit, but was still unsure, given my newbie-colorwork status.

I changed the colors up for this hat, since I was running low on the dark grey color.  The light grey became the main color – with the red and dark grey as the contrast colors.  And I had another pom to use!

The colorwork was fun and just as easy as before.  The only challenge – and it wasn’t hard at all – was keeping enough tension in the yarn you carry along.  But after watching a tutorial, this is easily mastered. 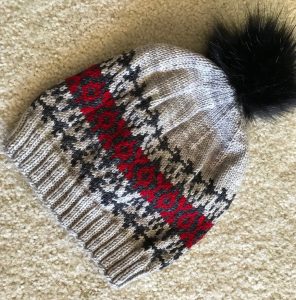 This was so much fun to knit – and so fast!!  Just a few hours every evening and it was done before I knew it!

Colorwork has definitely inspired my knitting brain.  Who knew something that seemed so daunting and scary could turn out to be such an inspiration and joy?  I think there’s a lesson to be learned there…..