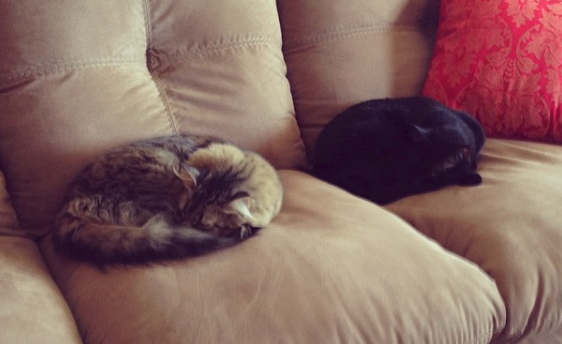 Despite us both having grown up with dogs, Matt and I are cat people.  There are many, many studies out there that claim that certain personality types prefer certain pets…and I’m not sure I believe any of them.  We prefer cats because they’re lower maintenance than dogs – and don’t demand as much attention. That being said, some cats demand a lot of attention!

But here is our cat family….

Despite being named for Darth Sidious, our Sidious is a girl.  Matt is a Star Wars fan and prefers the bad guys to the good, hence the name.  Sidious was adopted from a shelter a few years before I met Matt. She bonded to him in a way that I’ve never seen in any other animal, ever. 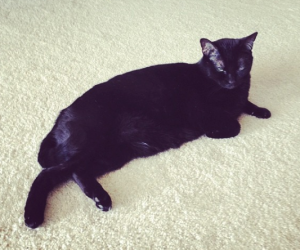 When we got married and all of us moved in together, I started feeding the cats, in hopes that Sidious would like me more.  In nine years, this has not happened yet. She is still Matt’s cat through and through. She sits on him whenever he’s on a couch and buries her head in his stomach – or sprawls out across him, her stomach in the air, just like a baby.  This kind of trust is so, so precious in an animal. She also sleeps with Matt, sometimes on top of him (which annoys him), sometimes beside him, under the blanket (which is great in winter), or sometimes at his feet. But she is always on the bed with us all night long.

Also named for Star Wars, Dooku takes his name from Count Dooku – mainly because of his white “mustache.”  Matt found Dooku outside, in a hole in the ground, a terrified kitten, about 6 months before we met. By the time we were dating, Dooku was a mostly inside cat.  We then got him fixed and brought him to our new house. 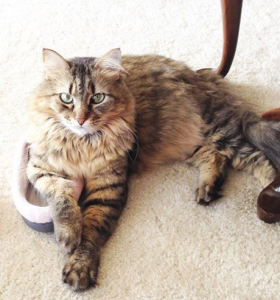 Dooku, we think, is part Maine Coon.  He knows that Sidious is the queen of the house and he yields to her willingly – mostly.  Dooku is not a lap cat. He’s more standoffish but he definitely wants love and attention – on his terms.  He is our problem child, though, due to his longer hair. He is the one with hairball problems and other issues due to all the hair.  But he’s also the cutest little guy – and most photogenic of our cats.

The most recent addition to our cat hoard is Zeus.  He showed up, along with his mom and three other kittens, about two years ago.  We fed the mama cat when she started coming around – and then she disappeared, along with her kittens.  A few months later, an adolescent Zeus showed up. It took us six months to gain his trust and let us pet him.   When it was clear he was going to stay around, we got him fixed and vaccinated. 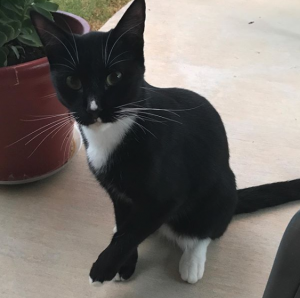 Zeus stays outside – we can’t handle another inside cat right now – but we bring him in when the weather is bad or when he’s scared of neighbors and goings-on outside.  He now trusts us implicitly, which is amazing, given how scared he used to be of us. His name comes from his white chest, which looks like a beard (and because Matt and I are history buffs and I demanded a non-Star Wars name).  But Zeus is the king of our backyard and has survived incursions from possums, racoons, other cats, and the occasional neighbor’s dog that comes around. He’s also the sweetest little guy I’ve ever encountered and loves laps. I hope we can bring him in, permanently, someday.

We love our cats.  Since we don’t have kids, they are our family.  Just like with people, they come with their own sets of problems, issues, and quirks.  But that’s what makes them unique.

I got my October Yarn Bliss Box and it's lovely, a