As I mentioned recently, I decided to join my first MKAL (mystery knit-a-long) this month.  The Stillness Shawl, from Curious Handamade’s Helen Stewart, was advertised as a relaxing knit with which you could enjoy the simple pleasures of life.  And, mostly, it’s been as described.  Today, I’m going to give you an update on my progress – though only the first clue has been released.

WARNING: SPOILERS AHEAD.  If you do not wish to see the first clue mostly knit up, do not proceed.

But I had a three-skein set of yarn from Madelinetosh, which I’ve had in stash for forever.  The fiber content (75/25) is not my first choice for shawls, but I can make do.  And the colors are great – purple, grey, and purple/white with a dash of red speckles. 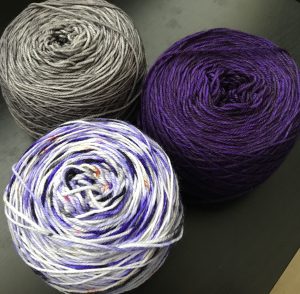 The first clue came out on Thursday; the next clue will come out tomorrow.  I’d hoped to be done with clue #1 by the time I wrote this post, but life has been a bit hectic this week.  I’m almost done – I just have a bit more to go.

And I’m loving it so far!  Look at this! 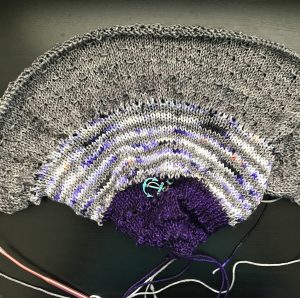 Stewart suggested using a more subtle yarn with which to knit that interested texture stitch you see in the gray at the top.  It looks really cool….but I’m not enjoying that particular stitch.  The more I knit – as in hours every day – the more my hands start to hurt, naturally.  And that stitch kills my hands.   If there is more of it in the pattern, as the shawl gets bigger, I may have to figure out something else.

Other than that, I’m really, really enjoying this pattern, especially the colorwork.  I haven’t  done that much striping in shawls and it’s so much fun!  One helpful thing: I happened to hear about Stephen West’s easy way of weaving in ends as you go and it’s wonderful!

Clue #2 comes out tomorrow so I need to hurry up and finish clue #1!  I really want to stay on top of the clues and not fall behind!  Eek!

If you’re doing the MKAL as well, post a photo of your progress!  I’ve seen so many different color combinations and they’re all gorgeous!

I cannot put into words how gorgeous these speckle

Slowly but every so surely, I'm adding little croc

If you need an Advent pattern, I highly recommend

Almost done with my Advent socks! This was my fir