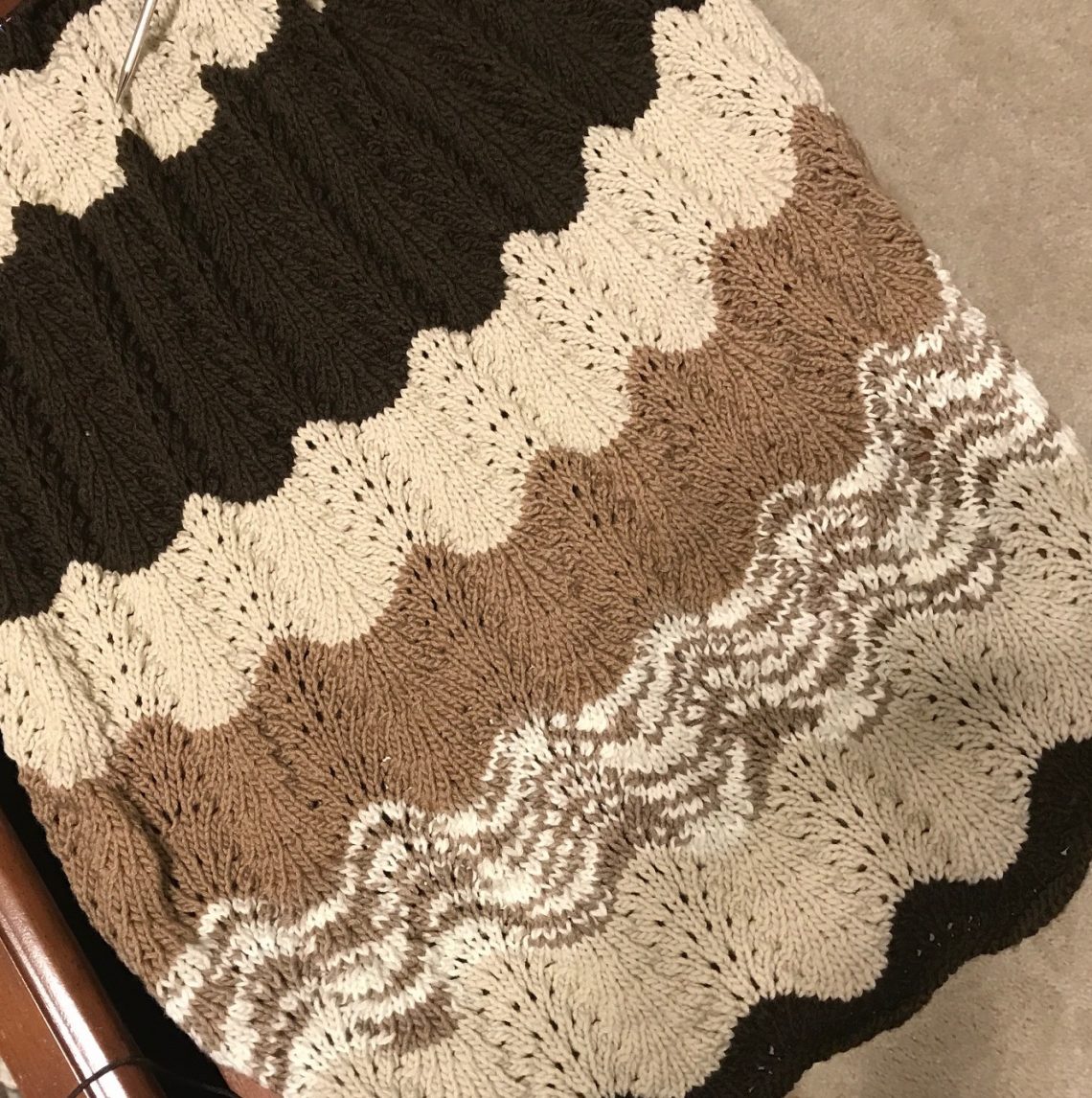 My UFO confessions continue.  Yes, I have quite a few UFOs (unfinished objects) but most of them are from my early knitting days.  I started a lot of foolish projects back then.  But one of them was very well thought out.  My Ripple Blanket started in a class that I took from a LYS that went out of business a few years ago.  It was a good class and I’m glad I took it.

But more on the blanket…

Though the class labeled this blanket as a baby blanket (the pattern is Edith’s Baby Blanket by Edith Eig), I decided to knit it as a general throw.  The yarn that was recommended, Berroco Comfort, came in some lovely neutrals and browns, so I decided on a neutral palette.

This pattern was a bit iffy for me in the beginning, as a newbie knitter, but I quickly got the hang of it.  It’s an easy knit now but it’s very repetitive.  The main pattern is a feather and fan, which is lovely.

When I first began this Ripple Blanket, I went about plotting when I would use what colors – the number of repeats for each color band etc.  Thankfully, I wrote all of that down because now, I have no idea what my original plan was!! 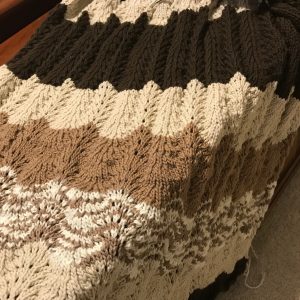 A few years ago, I had the bright idea of taking this to work so that I could knit on it when I had free time at lunch.  But I quickly grew bored with it – and took my Fade instead.  So I need to just force myself to work on this.  I do like it and want to finish it.

The great thing about this Ripple Blanket is that it would go well in two of the rooms of our house.  I had no way of knowing that when I started this blanket, long, long ago.  So, that’s a definite boon to finishing this project.

I’d say I have about two more feet of this blanket to knit, but I’m not quite sure.  I want it to be at least a lap throw so it doesn’t have to be huge.  One thing I must do is switch out the needles.  This is on Knit Picks interchangeable needles and the cables keep coming unglued from the needles.  (When I called Knit Picks about this several years ago, they were very unapologetic, basically saying, “What do you expect from needles after a few years?”  Um…  I expect them to not fall apart!)  So changing needles will decrease the stress of knitting this project – because I’m constantly afraid the cord will come undone and I’ll lose all my stitches!

Stay tuned on this project.  Maybe I’ll get it finished – in a year or two!